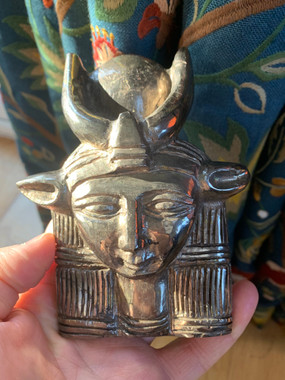 These Hathor carvings have an ancient other-worldly quality to them. It is as though they were carved thousands of years ago and have recently been re-discovered in the remains of a lost city. They are modern carvings though.
Tom Kenyon in his book the Hathor Material (co-authored with Virginia Essene) gives an impression of how the Hathors introduced themselves:
“We are the Hathors. We come in love and with the sounding of a new dream reality for your earth. If you are ready to build the new world, we invite you to join us on a journey of the mind and heart. We are your elder brothers and sisters. We have been with you for a very long period of your evolution on this planet. We were with you in eons past – even in the forgotten days before any trace of us is known in your present written history. Our own nature is energetic and interdimensional. We originally came from another universe by way of Sirius which is a portal to your Universe, and from Sirius we eventually proceeded to your solar system and the etheric realms of Venus.
In the past we have specifically worked with and through the Hator fertility goddess of ancient Egypt. We also made contact with Tibetan lamas in the formative period of Tibetan Buddhism. Although we have interacted with some of Earth’s early cultures, we are an intergalactic civilization with outposts that span parts of your known Universe and beyond.
We are what you might term an ascended civilization – a group of beings existing at a specific vibratory field, even as you have an energy signature. It is simply that we vibrate at a faster rate than you. Nonetheless, we are all part of the mystery, part of the love that holds and binds all the universe together”.
I asked the Crystal Oversouls for their guidance and this is their reply: “Beloved Ones’. Your multi-dimensional awareness has become as such that all that was previously challenging to you has become effortless. What was in the way has simply fallen away. Your multi-dimensional capacities have been restored through your inner work and have taken on a higher reality. You will find that the world of form is easier to navigate through than has been previously possible. The vibrational field that supports and informs your world has become more infused with higher light. Light of this quality has not been available to you since Lemuria. Hathor’s energy is part of an inter-dimensional force overseen by the Star Council to support those of you seeking to raise the quality of light upon your planet. These benevolent Beings seek to support the ongoing alchemical journey that is unfolding within humanity. What you hold in your hand is a crystalline form of Hathor that reflects the beauty and art of this consciousness. It is this beauty, effortless and exquisite beauty that seeks to inform your reality of the potential higher existence, one beyond form and materiality”
After a break, while I pondered on their words a further part came through. “Beloved Ones’. Hathor plays a further role. As each of you play your part in the birthing of the New Earth what you give birth to will require protection and nurturing. Hathor will nurture and protect your light-body while you continue on your sacred transition into a higher reality”.
Reflecting upon the transmission I imagined these carvings in a healing scenario. I can see these sacred objects being incorporated as personal meditation pieces or added to crystal grids. We can, if we choose to, invite more beauty, grace and ease into our field of possibilities.