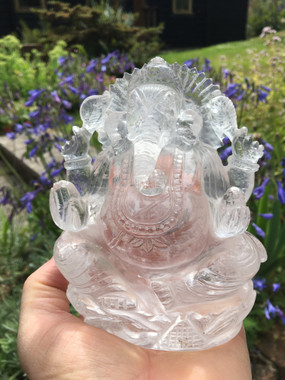 Subhamoy Das writes that 'the son of Shiva and Parvati, Ganesha has an elephantine countenance with a curved trunk and big ears, and a huge pot-bellied body of a human being. He is the Lord of success and destroyer of evils and obstacles. He is also worshipped as the god of education, knowledge, wisdom and wealth. In fact, Ganesha is one of the five prime Hindu deities, Brahma, Vishnu, Shiva and Durga being the other four. Ganesha's head symbolizes the Atman or the soul, which is the ultimate supreme reality of human existence, and his human body signifies Maya or the earthly existence of human beings. The elephant head denotes wisdom and its trunk represents Om, the sound symbol of cosmic reality. In his upper right hand Ganesha holds a goad, which helps him propel mankind forward on the eternal path and remove obstacles from the way. The noose in Ganesha's left hand is a gentle implement to capture all difficulties.' Connect to the energy of Ganesh by placing this beautifully carved quartz statuette in  your space.

Hand carved with the intention of the carver to reveal the energy of Ganesh. Measures 5" x 4".