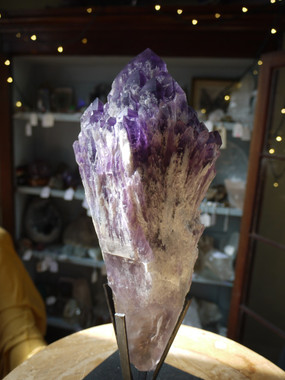 the following text comes from Katrina Raphael " Cathedrals (also known as Lightbraries or Light Libraries) appear as if they're made up of many parts when they are in fact one single crystal. These crystals are said to vibrate with with frequency of the universal mind. It is said that Cathedrals are destined to attract and record the thought forms that are in alignment with the supreme intelligence or mind of god and then convert it into a language that woman/man can understand."
and further text by Michael Eastwood
"Those chosen by a Cathedral deva will often be called to work in groups, as teachers or leaders because the work of a Cathedral is to unify, bringing the many together as one. Cathedrals hold innate intelligence, they sense who will work best with them. It is a true gift to be chosen and if one comes your way take it as a sign that you will be forming a group or be working with a group on the Soul planes. The Soul plane is where all Cathedrals connect, share and transmit knowledge.
A further way of working with these remarkable crystals is through their innate connection to the Halls Of Records. Their energy configuration assists those who desire to access the Akashic Records either for themselves or on behalf of others. Cathedrals seem to have an automatic setting whereby only those with pure intentions can access the records."

These crystals are Cathedrals yet something new and important has made itself known through their manifestation. They call themselves ‘Immortal Cathedrals’ and this is what they have to say.
“When you work with our consciousness you align yourself to engaging with the Immortals. You may wonder, why would you need to engage with them? We are not encouraging a disengagement with your world or for you to leave it behind so as to escape into some unknown disembodied inner landscape - rather, we seek to remind you of the way you are invited to co-create with the Immortals and their consciousness. For the Immortals are beyond time and space, yet building strands into both dimensions. They exist in another, more highly evolved plane of consciousness that seeks to serve humanity and its desire for growth and enlightenment.
The Immortals are best understood as a field of shared consciousness of multi-dimensional beings drawn from many kingdoms, stellar, elemental, unicorn and dragon. Imagine (if you will) that certain crystals (this being one of them) appear in your world as a manifestation and imprint of the light-vehicles of the Immortals themselves.
You may wonder, quite rightly, what could an immortal want with me? This is the way we see it. Many of you have ascended in your physical body while integrating your previous consciousness and your perception of your future selves. When you work with the Immortals and give them permission they  observe this world through you and you can access and observe their world through them.
It is vitally important for this co-creative process to understand and contemplate what we are about to transmit. Immortal consciousness is not something outside of yourself, it is the recognition that the Immortals are a vital level of who you are.....they are a new layer of your being that has become present through the multi-layered initiations that the cycle of the last twenty years offered. The deep purple tones manifest in this eye-catching form of Amethyst ask you to accept the majesty in your being while simultaneously broadcasting your vision imbued with Immortal consciousness. The multiple formations of these crystals exhibit the multi-faceted consciousness that each of you can work with and that desires to work with you“
Words by Michael Eastwood

A truly beautiful crystal that stands in a metal support specially made for this natural work of art. Within the stand it measures 13" in height by 5" wide. The Amethyst is a rich dark purple which imbues this magical piece with a powerful presence.