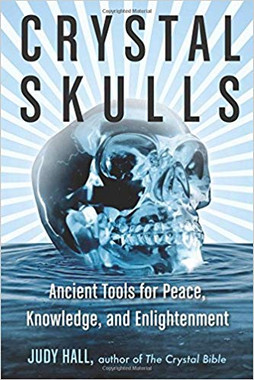 Crystal skulls are human-skull hardstone carvings often made of clear or milky white quartz known as rock crystal. They are allegedly pre-Columbian Mesoamerican artifacts and can be found in the permanent collections of a number of world-class museums, including the Smithsonian and the British Museum.

In occult and metaphysical circles, the skulls have magical and healing qualities:
Anna Mitchell-Hedges (owner of a particularly famous skull) claimed that the skull could cause visions and cure cancer and that its magical properties could be used to kill.Drunvalo Melchizedek claims in "Serpent of Light that" he stumbled upon descendants of the ancient Mayans who possess crystal skulls for use in religious ceremonies in Yucatan temples. Jamie Sams writes of the skulls association with Native American mythology.

In this book, best-selling occultist and crystal expert Judy Hall provides a basic primer on crystal skulls:
What they are Where they are found Their role in legend and lore around the world Their uses for physical and psychic healing

Also included here in this stunning introductory text is an examination of the prominent skull keepers of the past 100 years and how to use and communicate with a crystal skull.