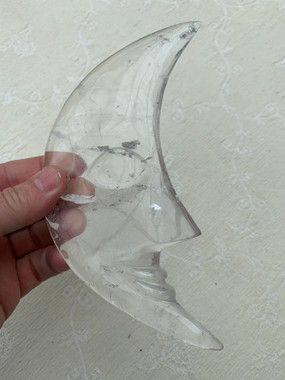 Many mythologies feature female lunar deities, such as the Greek goddess Selene, the Roman goddess Luna and the Chinese goddess Chang’e. Artemis and Hecate did not originally have lunar aspects, acquiring them later in antiquity.
Male lunar gods are also frequent, such as Sin of Mesopotamia, Mani of the Germanic tribes and Tsukuyomi of the Japanese. The ancient Egyptians had several male moon gods, Thoth, Set, Ibis and Khonsu of Thebes. In ancient Eygpt Thoth was depicted with the head of an Ibis, maybe because Egyptians saw the curve of the beak as a symbol of the crescent moon. Thoth was also depicted as a baboon holding up a crescent moon.
Many people work with the cycles of the moon as a way of reinforcing their magical practice. Crystals in the shape of a moon can enhance our focus during magical works or as objects of reflection.

This beauty has been hand carved from Clear quartz and measures 6.75" x 3.25" wide. It comes with a specially made metal stand which is included in the price.