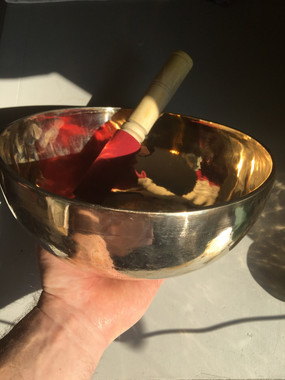 Tibetan Singing Bowls have been used in many traditions, though the exact ritual context is often obscure. However, the use of bells, symbols and similar instruments in meditative practices is common, and it is probable that the singing bowls were used in a similar manner. Both Buddhism and Hinduism include ideas of the role of sound and vibration in trance and transformation, as well as other religions. The notion that sound and vibration affect consciousness is also widespread and forms the basis for the ritual use of drums and other instruments in shamanic traditions. Certain sounds are used as therapy in many cultures, especially when someone is seen as out of balance or having lost their natural internal rhythm. Today, singing bowls are most often used as meditation aids. However, anyone can benefit from the relaxing, soothing effects of the sounds produced. Many people are also mysteriously drawn to the sounds and find them fascinating regardless of their spiritual faith