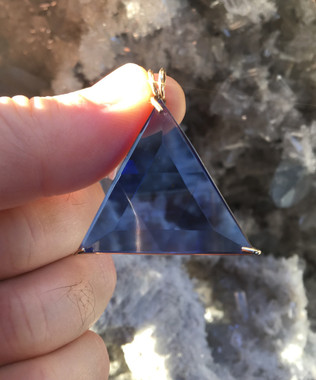 The Star of David is an ancient symbol. It has been recognized as one of the most important sacred symbols, not only in the Jewish tradition, but also in other cultures. The form of a six sided star which results from the merging of two overlapping triangles is an archetypal one - it is fundamental to consciousness. The symbol depicts the union that creates life itself: the marriage of male and female, of heaven and earth, of woman and man with divinity. Although the symbol is drawn two dimensionally, the symbol is actually multi-dimensional. In it’s full dimensionality it is a vehicle which often times is referred to as the Merkabah. It is this vehicle that allows us to experience our own multi-dimensionality during our physical lifetime.
Our Star of David  pendant combines the magical properties of the ancient symbol with the unique properties of quartz. This particular depiction of the Star of David was first developed by Marcel Vogel. The cut is unique in that the faceting of the quartz creates the six sided star. By placing an upright triangle on the face of the stone and an inverted triangle on the opposite face of the stone an energetic flow is established.

Siberian Blue quartz set in 14ct gold. Measures 1.5" - does not come with a chain.