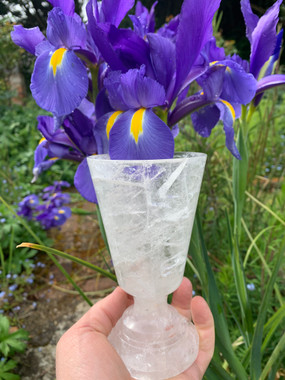 This unique Clear Quartz Chalice has been carved from a single piece of Quartz, there are no joins. The chalice symbolises many things, one being the Holy Grail. In Christian mythology, the Holy Grail cup used by Jesus at the Last Supper, said to possess miraculous powers. The Grail plays a different role everywhere it appears, but in most versions of the legend the hero must prove themselves worthy to be in its presence. In the early tales, Percival's immaturity prevents him from fulfilling his destiny when he first encounters the Grail. He must first grow spiritually and mentally before he can locate it again. In later tellings the Grail is a symbol of God's grace, available to all but only fully realized by those who prepare themselves spiritually. Measures 3" wide at the top by 5.5" high.