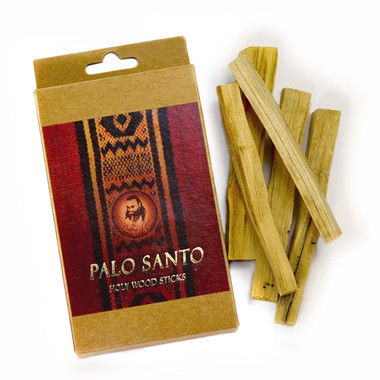 Palo Santo is a sacred wood that is sustainably harvested in the Amazon rainforest from trees that fell naturally. When it is burned, it releases the sacred wood’s oils to cleanse the space and people it comes into contact with, attract positive energy, and it is also believed to heal people on both physical and more subtle levels. This increases the ability for people to concentrate and it enhances meditation. The aroma is similar to tree resin, but unique for a reason that many will not expect. Shamanic wisdom explains that an attraction to the aroma of Palo Santo is a sign of emotional and spiritual purity.

Sustainably harvested in Ecuador: part of the profits go toward financing the Palo Santo Reforestation Project organized by the Forestry and Environmental Corporation of Manabi (CORFAM) which is fully acknowledged and supported by the Food and Agriculture Organization of the United Nations (FAO).

How to use: This is a rare, aromatic wood that has been used by shamans for thousands of years. Hold a piece of wood slightly upside down and light the tip until there is a small flame. After 1 minute, blow it out so only smoke is produced. Place it embers-up in a fireproof bowl and gently blow on the embers when needed. It may need to be re-lit several times.  Some prefer to keep small rocks in a fireproof bowl and the put the embers into the rock bed in order to put it out when finished. The stick can be reused several times until it is too small to burn.