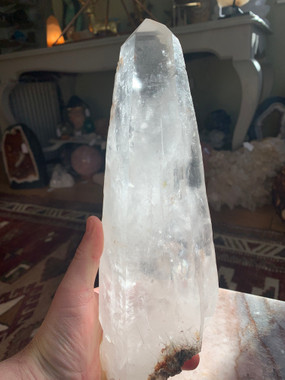 In her seminal masterpiece ‘Crystal Healing’ Katrina Raphaell writes about these crystals “Laser wands were stored within the sacred chambers of underground temples and are now being relocated, mostly into mines on the South American continent. The beings of inner earth have kept these crystals safe and protected and have only recently released them onto the surface of the earth to be used once again in advanced healing practices.”
She further writes “ Laser wands often have etching or markings on them unlike any on other types of crystals. The writing on these crystals resembles hieroglyphics that entice one into deciphering the symbols that are obviously presented. These crystals, that were once used in the healing temples of Lemuria, recorded their own experiences as they gathered knowledge on the human condition and how to heal it. Therefore, the more healing that was done with these crystals, the more powerful they became, the more knowledge they contain, and the more markings can be noticed. Through personal meditation and attunement with etched Laser wands one can virtually be educated in the advanced healing arts that were practiced by the Lemurians”.

These Laser wands have something different about them that caught my attention. I spent a few days handling each crystal while pondering their unique resonance. It was while handling them that it was impressed upon me that these special crystals are called “Light Being Laser wands”.
They have a shimmer across their crystalline surface, as well as in their aura, that I have not previously witnessed, this led me to investigate further. In meditation I asked the Oversoul and here is their reply. “Beloved one. Light Being Laser wands have arrived to assist in your mastery. They are here to help recall star heritage so that you may fully anchor more of your vast galactic multi-dimensional selves, to embody realms of lightness with a renewed sense of ease and grace that have previously been unavailable to you. The glyphs that are etched along each crystals surface can be accessed by being gently touched and whilst doing so you will be able to access realms of gentle starlight. This process invites a divine coalescence that, once begun, broadcasts starlight into your dna, awakening long forgotten memories of Lemuria along with it’s connection to your starry family. When working with these crystals a divine marriage unfolds within your inner light field that unifies your starry and Lemurian self. This process will be ongoing, taking place on planes of your Being that were previously inaccessible. The hieroglyphics in these crystals originate from your starry self. They are not fixed to the surface, they will change and adapt according to your growth”.
While processing these words the Oversoul begun, a few days later, to impress further thoughts on these powerful crystals “Beloved one. These crystals are alive with infinite possibilities and consciousness in their own right. Treat them as gifts from the Gods and Goddesses themselves, for they contain awakened sparks, a direct link between beauty and remembrance.”

Words by Michael Eastwood and the quartz Oversoul.