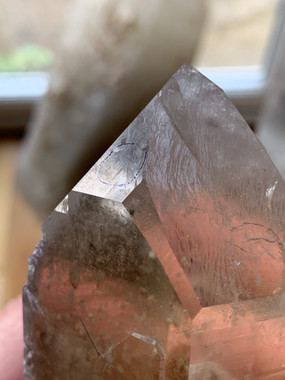 A beautiful natural Citrine point smothered in Lepidolite inclusions. It is a recorder and a time-link.

Citrine connects us for fully to our natural ability to create all that we need to make our lives richer. Through its emanation we are reminded just how abundant life can be.

With the support of Lepidolite we are encouraged to release feelings that no longer serve our highest good.

Record keepers exhibit raised or indented triangles on the surface of quartz crystals. They can also appear on Ruby, Aquamarine and some other stones. They are powerful co-creators containing much knowledge and wisdom from Atlantis and Lemuria.
Atlantis and Lemuria were the early star seed civilizations where many us first began descending into matter, bringing with us our star culture and galactic heritage which began blending into our everyday Atlantean and Lemurian consciousness.
The star-seed cultures originated from multiple star cluster systems including Lyra, Arcturus, Andromeda, Sirius and the Pleiades.
Throughout numerous Atlantean and Lemurian life-times we experienced crystal consciousness in ways difficult to comprehend in our current time as science, the arts and healing were one and the same. Much of the focus around crystals took place in the crystal temples. These temples played a vital part of everyday life existing as they did on remote islands scattered around Atlantis and Lemuria. The temples were places of divine pilgrimage and worship with the crystal devas playing essential roles in the guardianship of these holy spaces. There was much in the way of dialogue between the devas and the visitors. There are still places on earth where the magical residue of the temples remain. Our ancestors have continued to revere such places by building holy buildings upon what remains, being drawn by some ancient long forgotten knowledge that hangs in the air. Some of these places remain in the natural landscape with people being drawn by some unseen force calling them to step out of ordinary consciousness into a higher state of being.
Atlantean and Lemurian consciousness was such that many of us knew that these immense cultures would at some point recede from the earth into the inner planes. When the time finally came many beings placed a wealth of Atlantean and Lemurian knowledge into the crystal kingdom to be retrieved at a later age. An age when that knowledge would be required. For many that age is now and those Atlantean and Lemurian beings are us.
Recorders bring to the surface what it is we need to know without us even knowing what it is we need to know. These special crystals teach us without appearing to do so. What needs to be retrieved will become, for some, visible by working closely with these crystals.

It was Katrina Raphaell in her masterpiece ‘the Crystalline Transmission’ that first introduced the term Time link crystals. Other writers have proposed the words Time line crystals.
The keywords for this powerful crystal are:
Traversing time (either left or right parallelogram).
Traveling backwards through time in order to free aspects of ourselves still trapped or traumatized in the past (left parallelogram).
Working with future progression (right parallelogram).